GLORIA SWANSON READY FOR HER CLOSE UP” 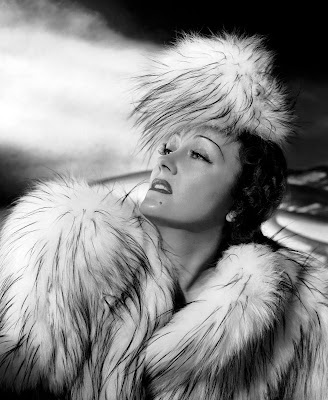 Sunset Boulevard is undoubtedly a film noir classic and is considered to be one of the most noteworthy films in American cinema history. 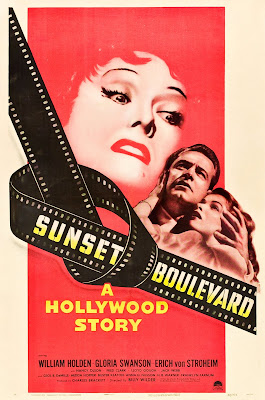 Nominated for eleven Academy Awards and winning three, the film was selected for perseveration by the National Film Registry. It has at times ranked in the top 10 films ever made and remains on the American Film Institute's list of the 100 best American films.

“Sunset Boulevard” was released in 1950 by Paramount Pictures. It was directed by the great Billy Wilder. 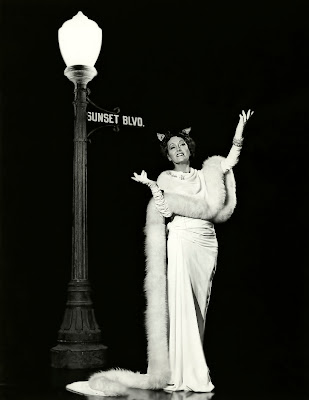 Swanson was indeed one of the great stars of the silent era. Swanson worked at Paramount Pictures and with Cecil B DeMille. For a time she was the highest paid star in Hollywood. In that respect she was born to play the role. Some say that the role was based on another silent film star, Norma Talmadge. The similarities however happily end there. The scene in which she appears with DeMille (who plays himself) and meeting Desmond after a long absence is a heart-warming one in terms of their history and careers. DeMille refers to Desmond as “Young Fella” in the scene, a name he lovingly created for Swanson.

Several of Desmond's lines, such as, "All right Mr. DeMille, I'm ready for my close-up," and "I am big, it's the pictures that got small!" are widely remembered and quoted from the film.

The film has also been talked about for its film noir cinematography which is of course dark.

From this film classic is a pink chiffon nightgown was worn by Gloria Swanson. 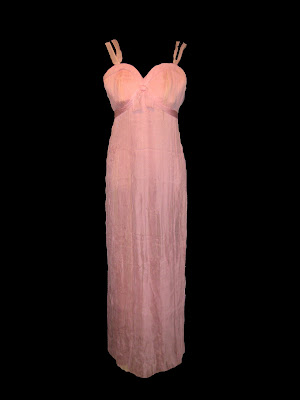 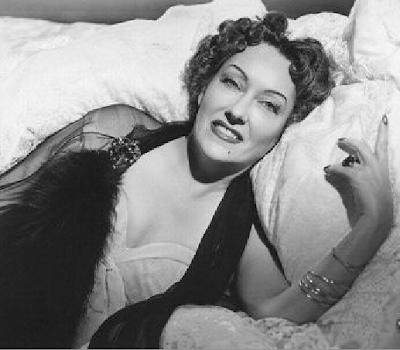 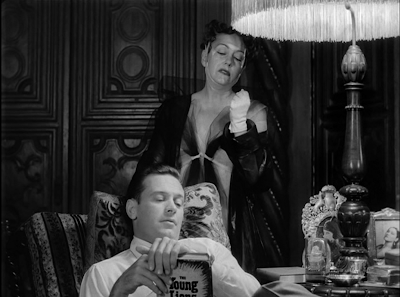 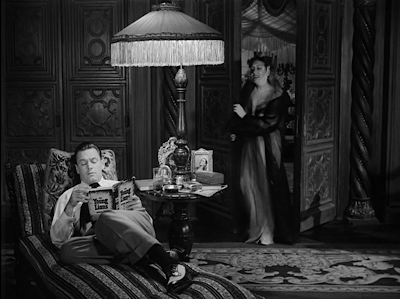 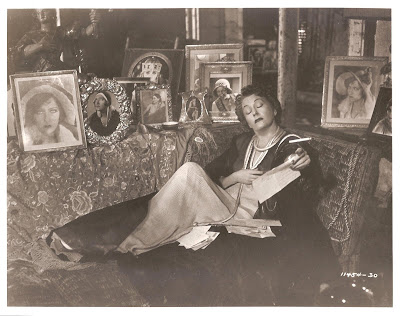 The gown features chiffon pin pleats with a bow at the centre of the chest and two ribbon shoulder straps on either side. 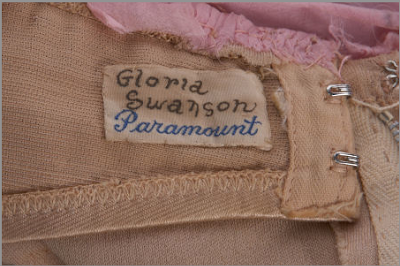 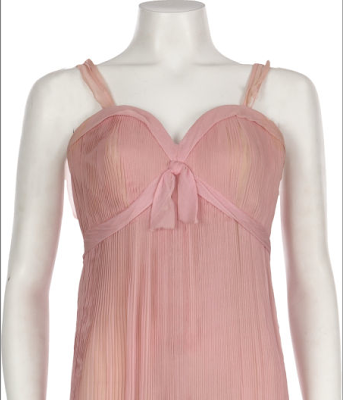 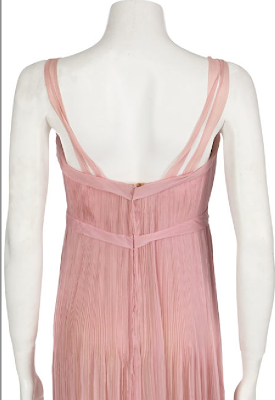 Edith Head in later years discussed working on the film as being "the most challenging of my career,". The approach she gave to the task was explained as "Because Norma Desmond was an actress who had become lost in her own imagination, I tried to make her look like she was always impersonating someone." Edith Head would also rely on Swanson's expertise as in her words, Swanson was the past that was being recreated and Swanson lived that time. 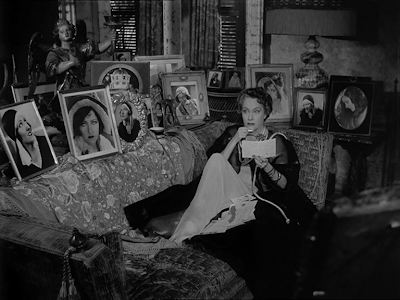 Edith Head also designed the costumes for William Holden and the minor characters; but for authenticity, Wilder instructed Von Stroheim and Nancy Olson to wear their own clothing. 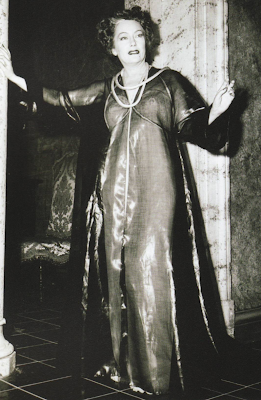 The costume can be seen in two sequences in the film. The first is Joe Gillis’ first day at the Desmond mansion when he finds his belongings have been moved from his apartment and into her mansion. Norman tells him “he will like it here” and the wonderful line…”Do you want this job or don’t you?”…yes he wanted the job but at what price. The costume comes in at 12.38:

The second scene it is worn in we get to see the more manic, delusional and shall we say psychotic Norma when she believes that her script of Salome is to be made by Paramount and Cecil B DeMille. In the scene she is saying good night to Joe and at the same time accusing him of going out. Joe tells her he hasn’t done anything to which she replies…’of course you haven’t, I wouldn’t let you”. The costume comes in at 1:08:

And here is the original trailer for the film:

The theme of the film is best summed up in the closing monologue of Norma..

“I can’t go on with this scene, I’m too happy. Mr. DeMille do you mind if I say a few words? Thank you. I just want to tell you all how happy I am to be back in the studio making a picture again. You don’t know how much I’ve missed all of you. And I promise you I’ll never desert you again because after ‘Salome’ we’ll make another picture and another picture. You see, this is my life. It always will be. There’s nothing else. Just us, the cameras, and those wonderful people out there in the dark!… All right, Mr. DeMille, I’m ready for my close-up.” 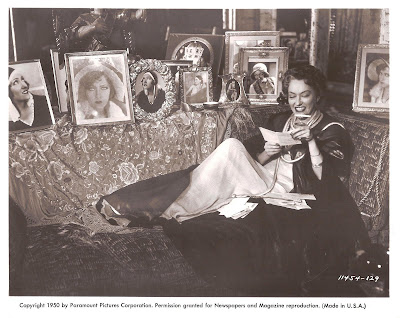 Gloria Swanson stood 4' 11½". Her stature and presence on the screen however soared. 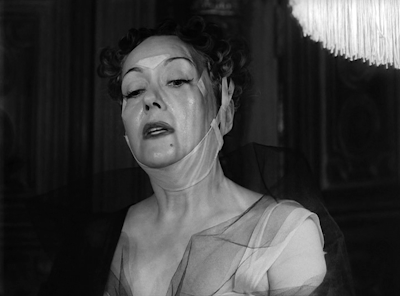 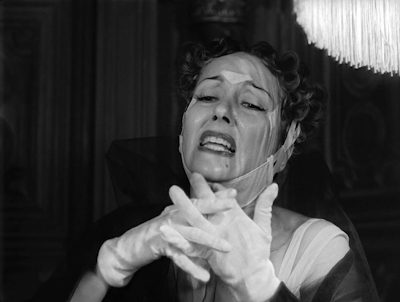 Swanson appeared in a few more films after this role however in reality they did not compare. She is also remembered for her cameo appearance in the 1975 film “Airport”. 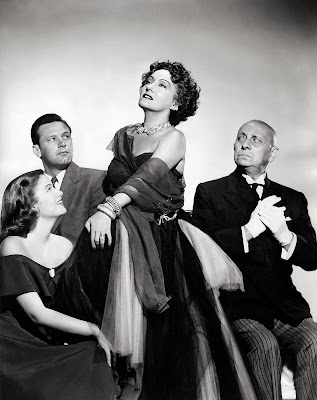 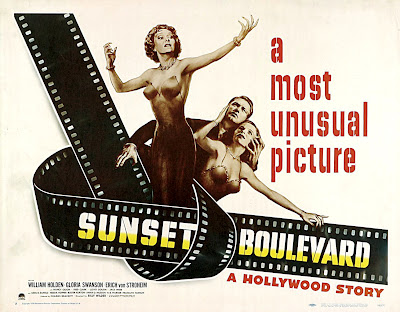 Posted by thecostumecollector at 12:13 AM