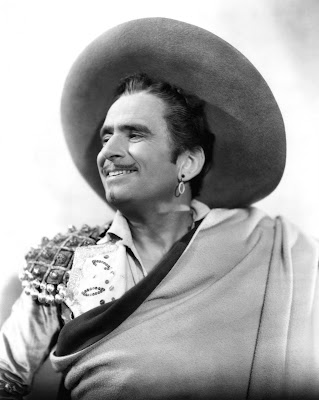 Douglas Fairbanks, Sr is considered to be one of the earliest of the film greats and has on many occasions been referred to as The King of Hollywood. This was until Mr Gable came along to usurp his throne. He is remembered best for his swashbuckling roles in early silent films as well as being a prolific director and producer.

He will also be remembered for his role as founder of a major studio, United Artists as well as the Motion Picture Academy.

Married at one time to another Hollywood great, Mary Pickford, they lived together as Hollywood royalty in the famous estate known as "Pickfair". They married in 1920 and separated in 1933. They had a son that grew up to be another famous actor in his own right, Douglas Fairbanks Jr. 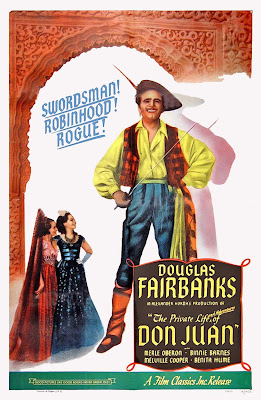 Douglas Fairbanks appeared in some very memorable films of the silent era including Robin Hood (1922), The Three Musketeers (1921), The Thief of Bagdad (1924), The Black Pirate (1926), and The Gaucho (1927). His stamina, strength and death defying stunts on screen established him as one of the great swashbucklers of the early screen. 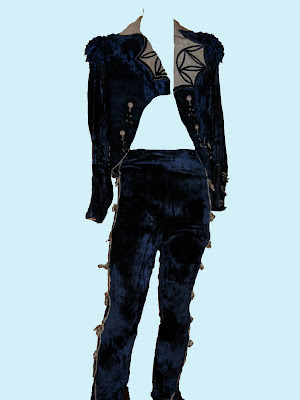 This costume piece was worn by Fairbanks in the film “The Private Life of Don Juan” (1934). Produced by Alexander Korda, this was to be his final film appearance. 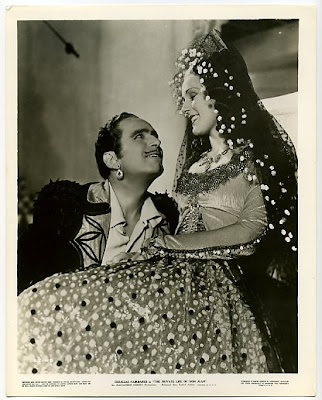 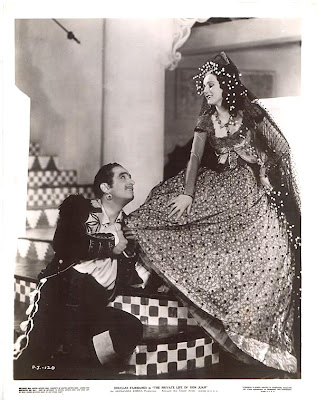 The costume consists of two pieces being a royal blue velvet jacket and pants. The jacket features wide satin lapels with intricate design including tassels and buttons, which can also be found on the trousers. Costumes were designed by Oliver Messel. Messel, a designer predominanty for the stage, is also rememeber for his designs in the MGM classic “Romeo and Juliet” with Norma Shearer and Leslie Howard. 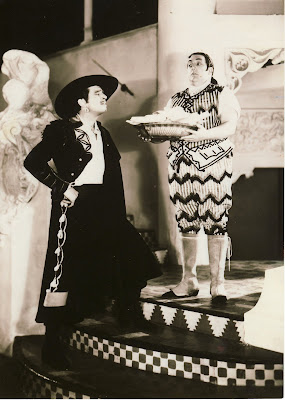 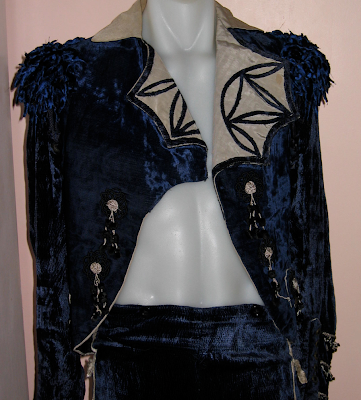 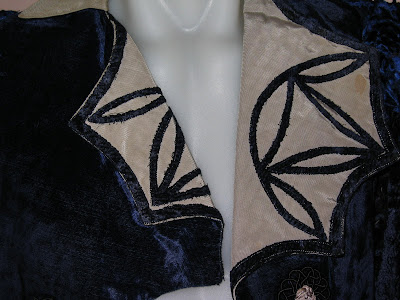 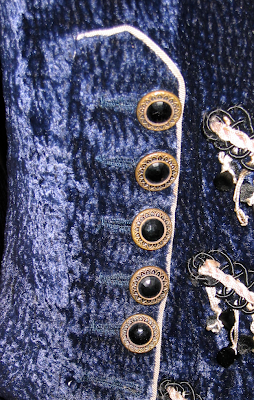 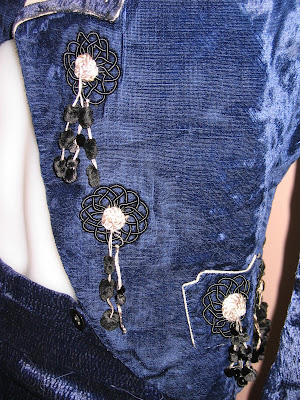 The Private Life of Don Juan is a British comedy-drama film about the life of an aging Don Juan. The film also starred Merle Oberon. 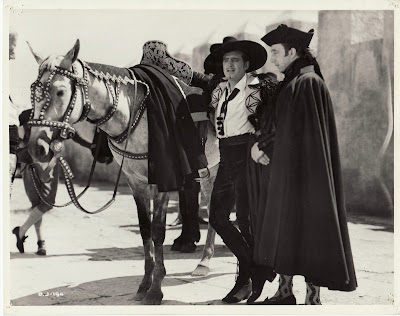 At the age of 56 in 1939 Fairbanks suffered a heart attack in his sleep and died shortly thereafter. 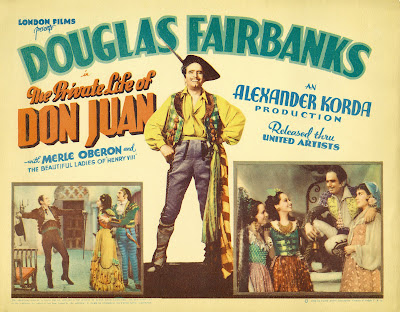 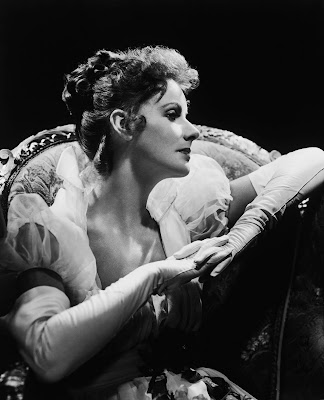 She was born Greta Lovisa Gustafsson. To the screen loving public however she was simply known as GARBO.
A major star of the silent era and the MGM period of the 1930's and early 40's, Garbo gained her popularity not only for her screen perona but also for her private life and elusivenss. In later years Garbo wanted to be left alone. The public refused to do so. 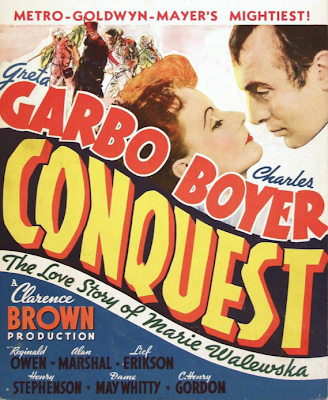 This beautiful piece is a scarf worn by Greta Garbo in the 1937 MGM costume drama "Conquest". The film was also known by another title of Marie Walenska, the character played by Garbo. 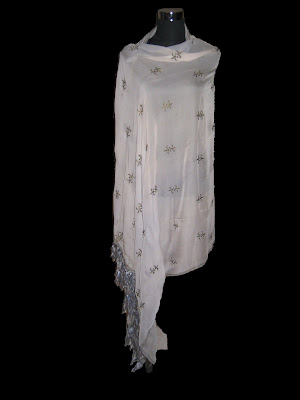 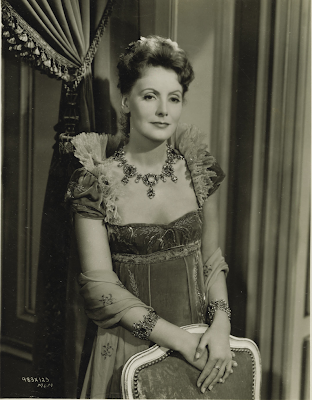 The scarf measures a huge 40x90" and is a three line gold trim vintage silk with fleur de lis design and satin fringe pattern throughout.

Conquest tells the story of a polish countess played by Garbo who becomes Napoleon Bonaparte's mistress and who feels that she may influence him to make Poland an independent State. 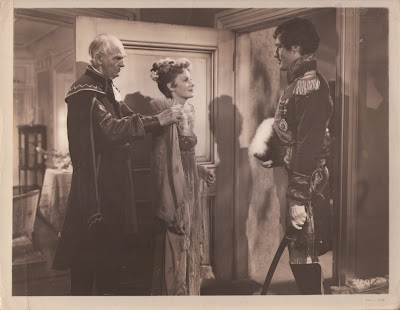 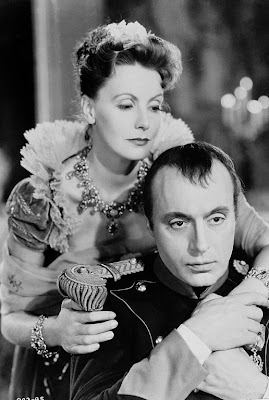 The costumes were designed by the legendary Adrian who designed for many of the MGM great stars in the 1930's and 40's including Joan Crawford, Norma Shearer, Lana Turner, Judy Garland, Jeanette MacDonald, Jean Harlow and Katharine Hepburn.

Adrian worked with Garbo throughout the course of her career. As with Garbo, Adrian Adolph Greenberg was simply addressed on screen and in any publications with the phrase "Gowns by Adrian". 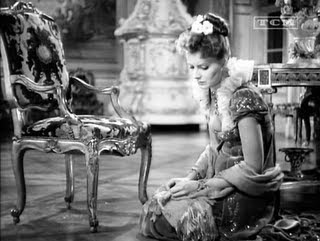 Garbo made the transition from silent film to sound well. The studio waited for the best vehicle for her to do this which came along in the form of Anna Christie in 1930. The phrase "Garbo Talks" was one well known to the movie audiences of 1930 who could not wait to hear what she would sound like. They approved.

Garbo has appeared in many memorable film classics including Anna Karenina (1935), and as the courtesan Marguerite Gautier in Camille (1936). Garbo turned to comedy in the 1939 classic, Ninotchka (1939) and Two-Faced Woman (1941) her final film. Garbo retired to her New York appartment. She was a prolific traveller however and to her circle of trusted friends continued her social life. 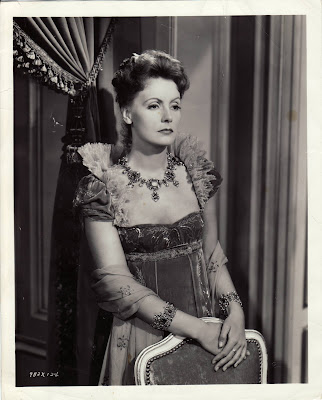 Up until the end of her life, Garbo sighting in New York was considered a great thrill to the fans who remembered her and her works. To the media, she was another chance at an exclusive photo of the ageing star.

Various attempts to return to film took place over the years but it was never meant to be.

Garbo was reported to have attended a film festival of her films in the 80's in disguise to see her performance on the screen. In the seventies when the Metropolitan Museum of Art conducted a retrospective of film costume under the eye of Diane Vreeland, Garbo costumes were on display.

A private viewing before the public opening was requested by Garbo who attended one morning to view the costumes including some she wore in films like Camille and Anna Karenina. Garbo is reported to have touched the pieces like she was saying hello to an old friend and remembering the magic of what was. Garbo did for a time enjoy what she did, being an actress and being the best she could be on film. The camera loved her face, the audience loved what they saw. It was a match made in the movies! 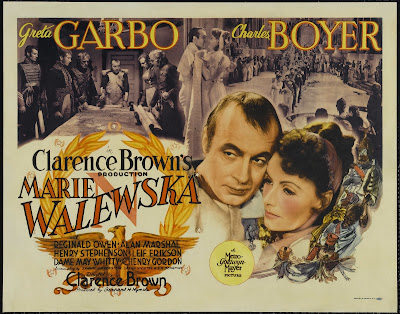 Posted by thecostumecollector at 2:25 AM 2 comments: