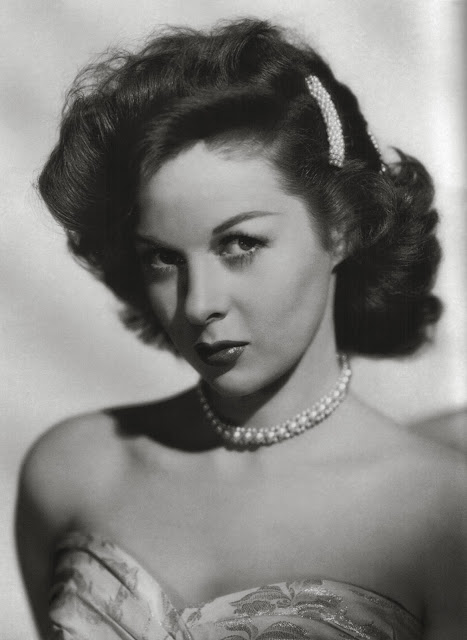 Here is an amazing full length period costume gown worn by Susan Hayward in her role as “Messalina” in the film “Demetrius and the Gladiators” and made at 20th Century Fox in 1954. 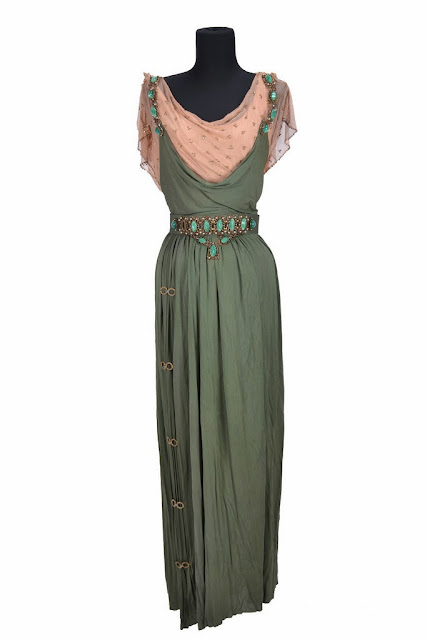 Here is the back of the gown. 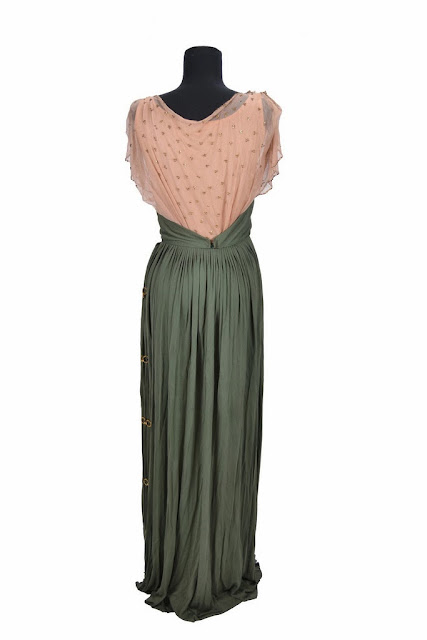 The belt and neckline are accented with these amazing gold metal filigree, green faux stones , faux pearls and pink rhinestones.  Along the sides of the skirt are dark gold metal circles. Here is a great Fox close up of Hayward wearing the costume. 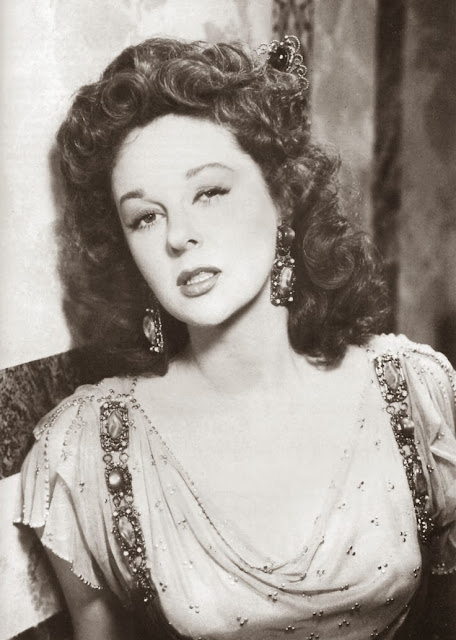 Here is a close up of the bodice showing the intricate design to the costume. 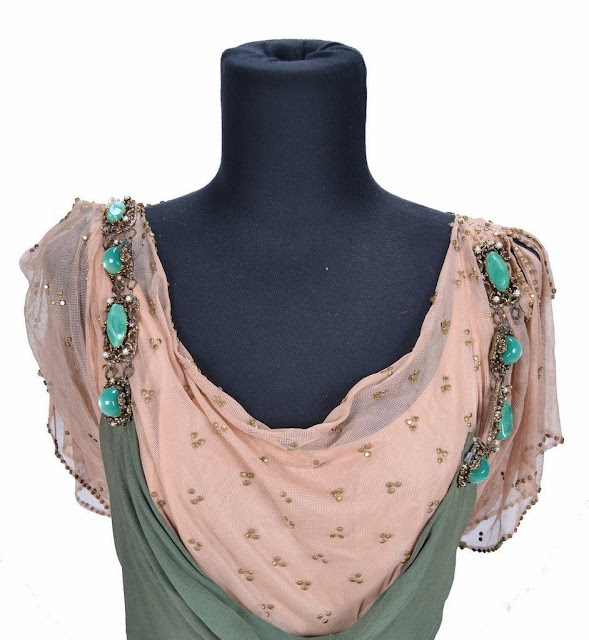 The gown carries a handwritten internal bias label “1-25-1-4366 A-712-14 Susan Hayward”.  Hook & eye with snap side closure.  Here is a photo of the label that was the type used by Fox in their ladies pieces.

Charles Le Maire designed the costumes for this feature.

The belt is an amazing design as you can see below. And to have survived relatively intact with only one stone missing. 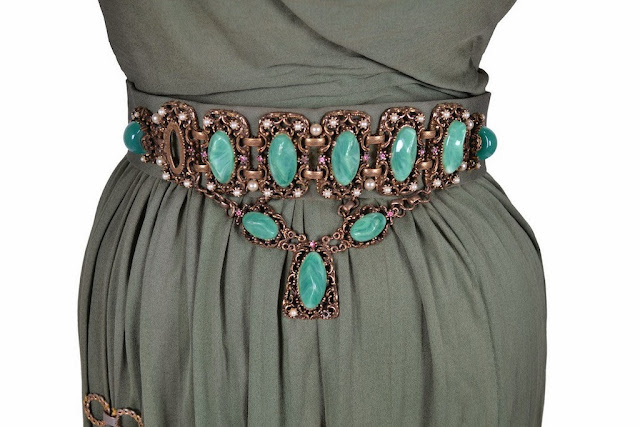 Here is another close up of the design to the shoulder area, similar to the belt. 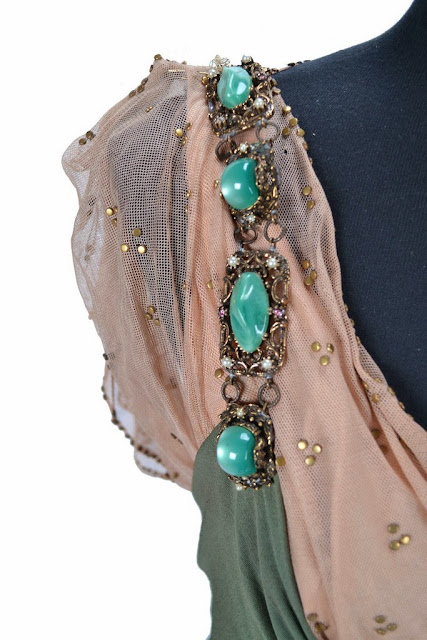 The gown can be seen when Susan Hayward as “Messalina” visits the Gladiator camp run by Ernest Borgnine and Victor Mature tries to escape during the visit. 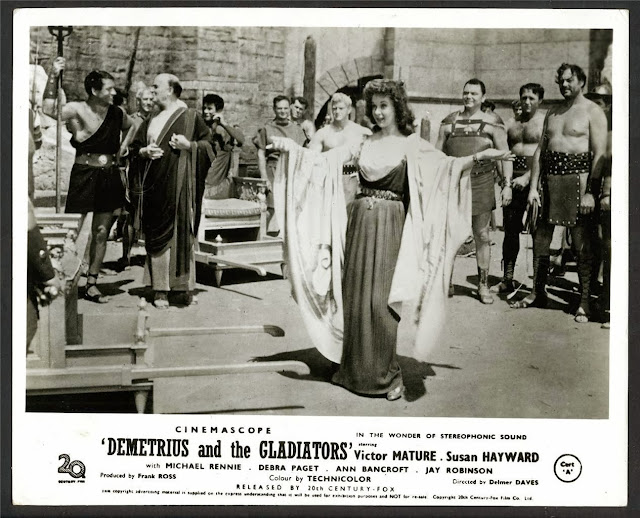 Demetrius and the Gladiators was one of the many sword-and-sandal films made during the 50’s.  It also starred Victor Mature as Demetrius, a Christian slave made to fight in the Roman arena as a gladiator. The cast also features Ernest Borgnine, William Marshall, Michael Rennie, Jay Robinson as emperor Caligula, and Debra Paget. It also features a young Anne Bancroft in one of her earlier roles. 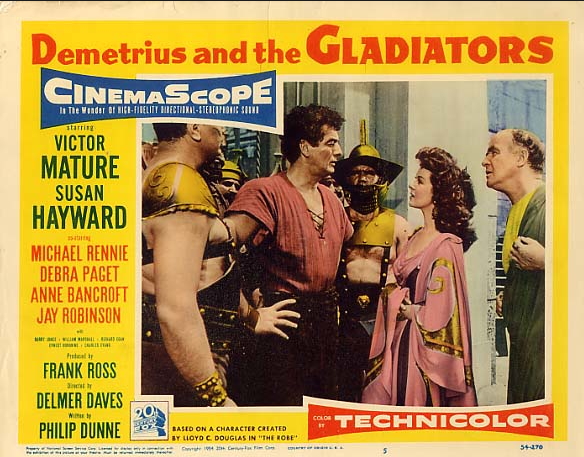 You can see from these from these photos below how amazing the film looks in not only Technicolor but also in Cinemascope.

The film was a sequel to “The Robe” and interestingly begins with a clip from that film showing the original stars, Richard Burton and Jean Simmons going to be martyred for their Christian beliefs on the order of Emperor Caligula.

Here is the scene in which the costume appears:

Here also is the original poster art for the film. 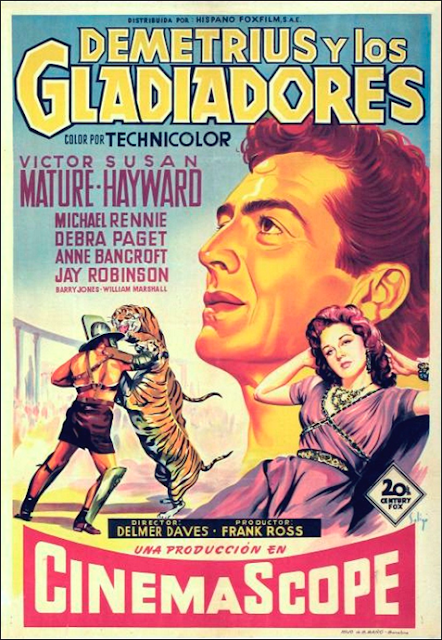 Posted by thecostumecollector at 9:35 PM 2 comments: