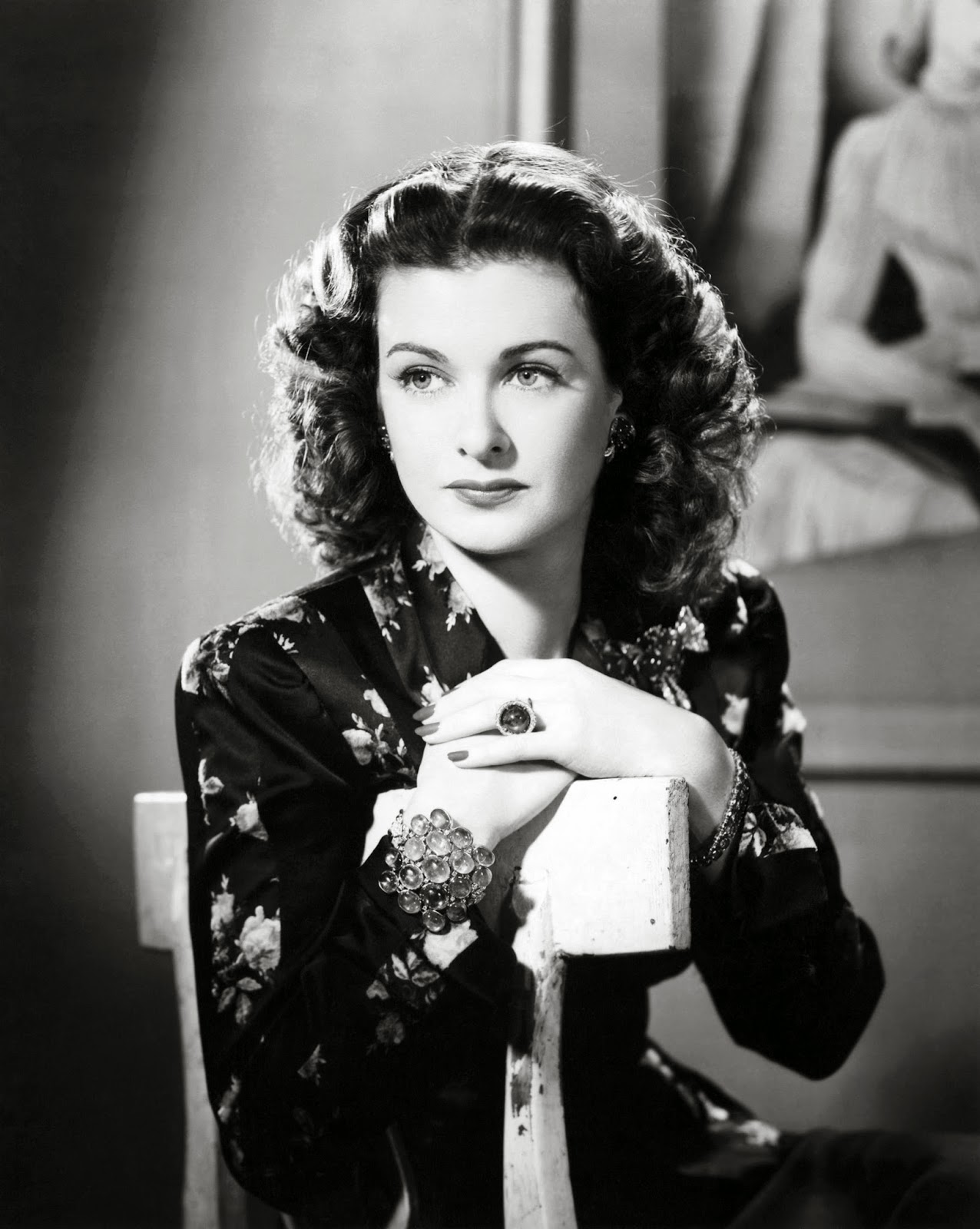 This is just incredible and to have survived so amazingly well. Here is an absolutely breathtaking petal pink satin period costume gown worn by Joan Bennett as Princess Maria Theresa in the film 'The Man in the Iron Mask' (United Artists, 1939). 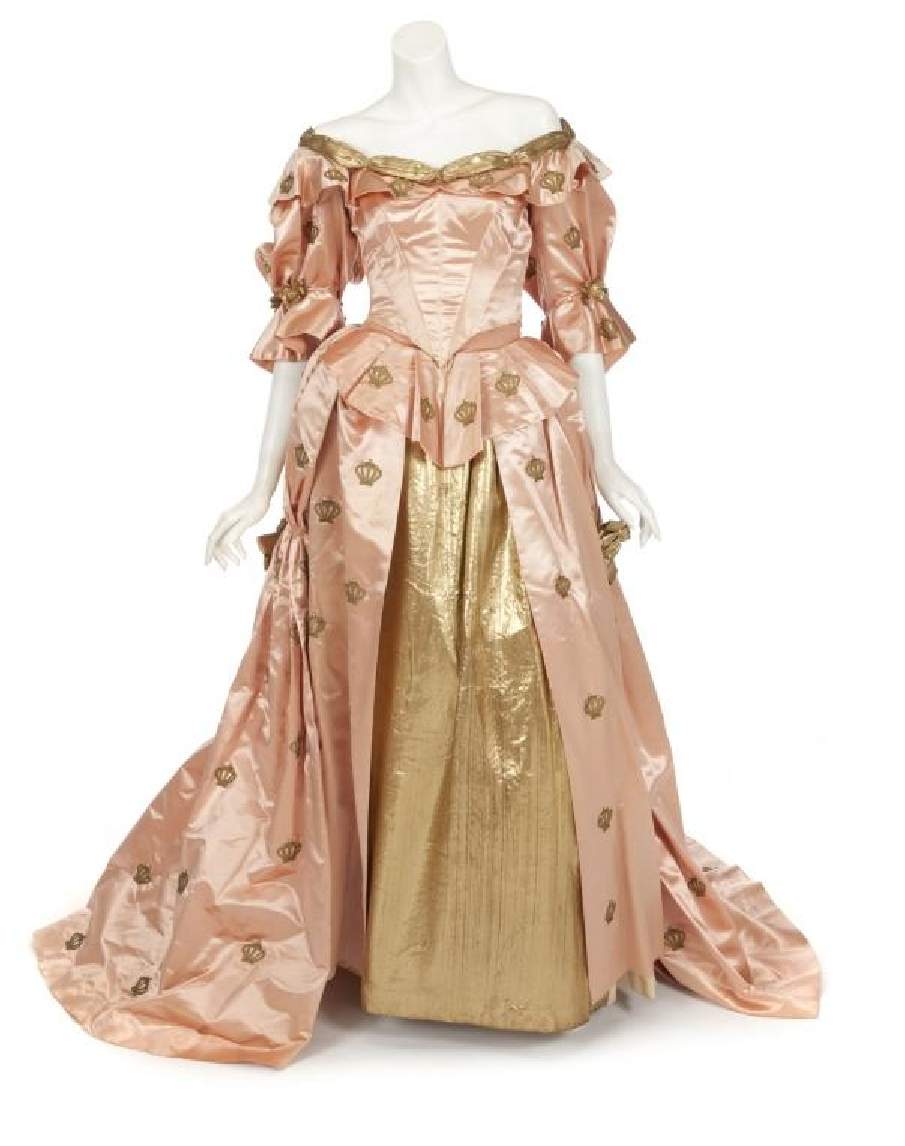 The costume is embellished with gold applied crowns, artificial pearls and gold lamé trim and bows. This is an amazing example of what really went into fabric choices for costumes in black and white film and what was really lost to the general public going to see these films and not getting the full effect of these unbelievable colors. 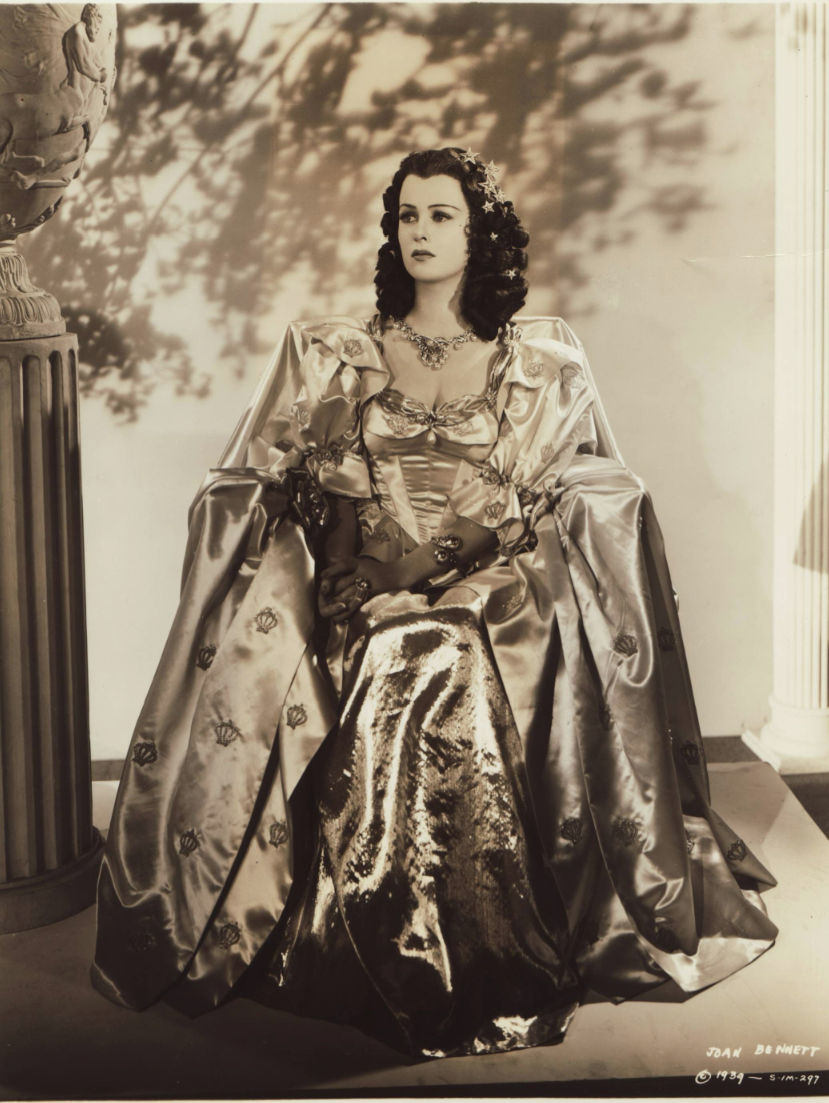 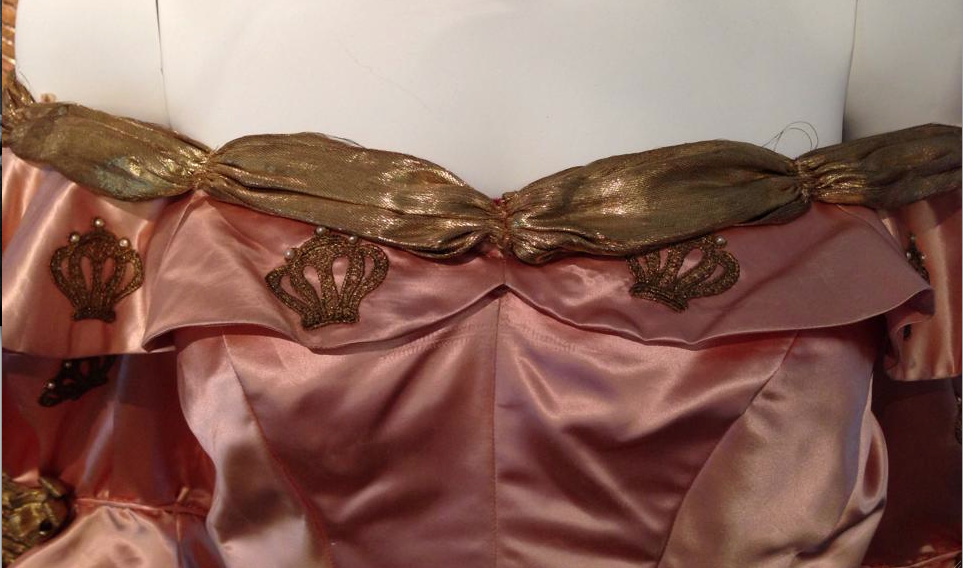 The bodice is boned with puffed sleeves, and the skirt is trained with a partial gold lamé underskirt. 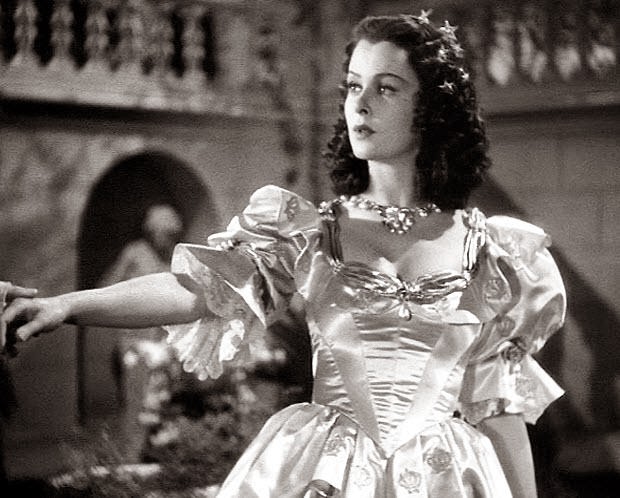 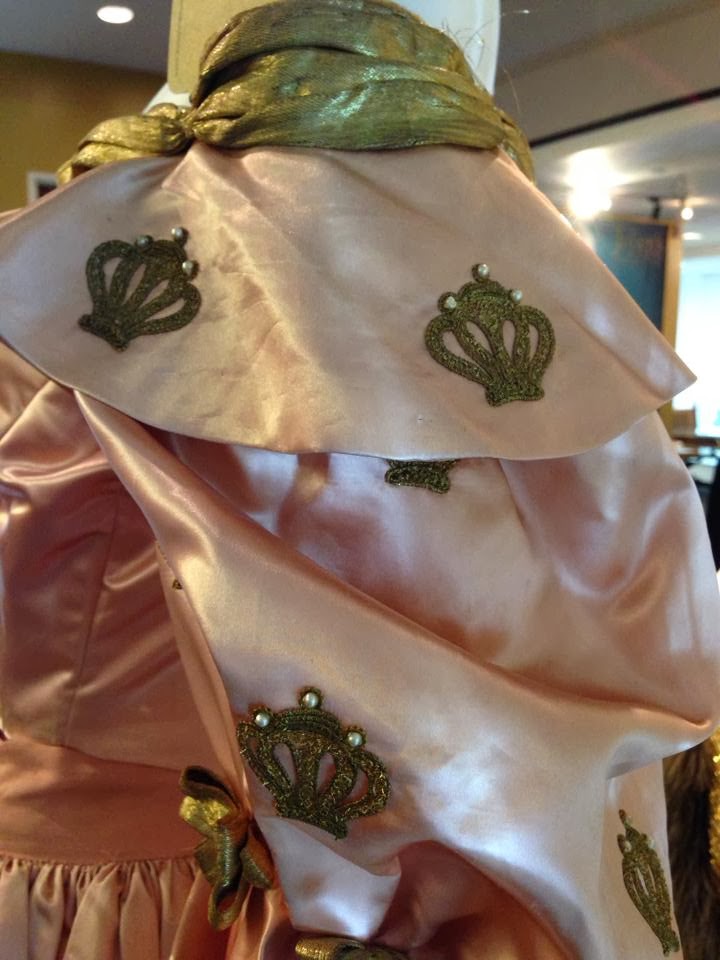 There is a United Costumers label reads "No 25G Joan Bennett" in the skirt and an "S. Goldwyn" stamp to the interior of the bodice.

William Bridgehouse designed costumes for the film. The film was made at United Artists studios.

Here is a beautiful photo of the rear showing the amazing period train. 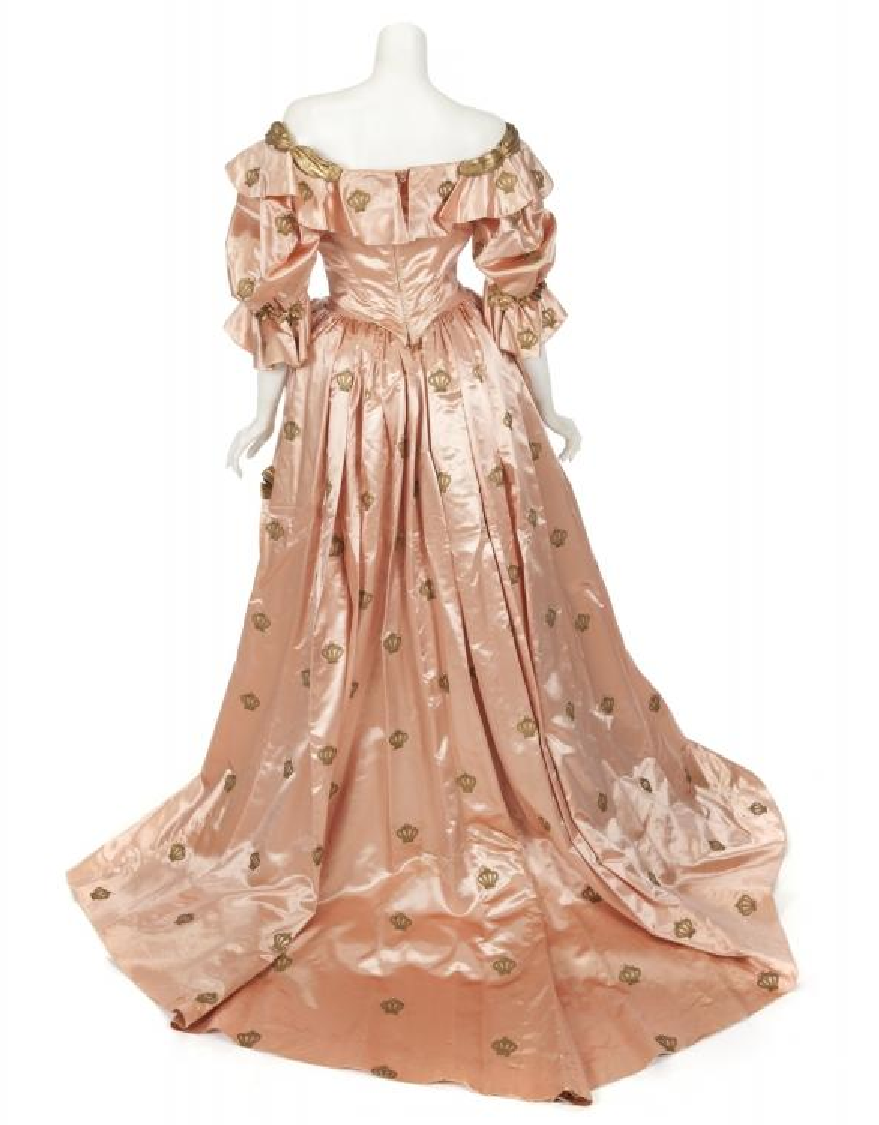 This famous costume adventure tells the story of a twin brother of Louis XV kept hidden away in a prison and forced to wear an iron mask to hide his identity. This was the second of five screen versions. 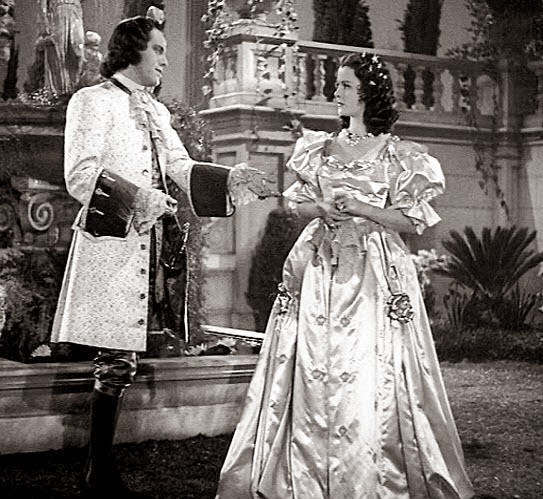 The costume appears in a number of stills with Joan Bennett. The gown was glamorous enough to be well photographed and used in a number of production stills. 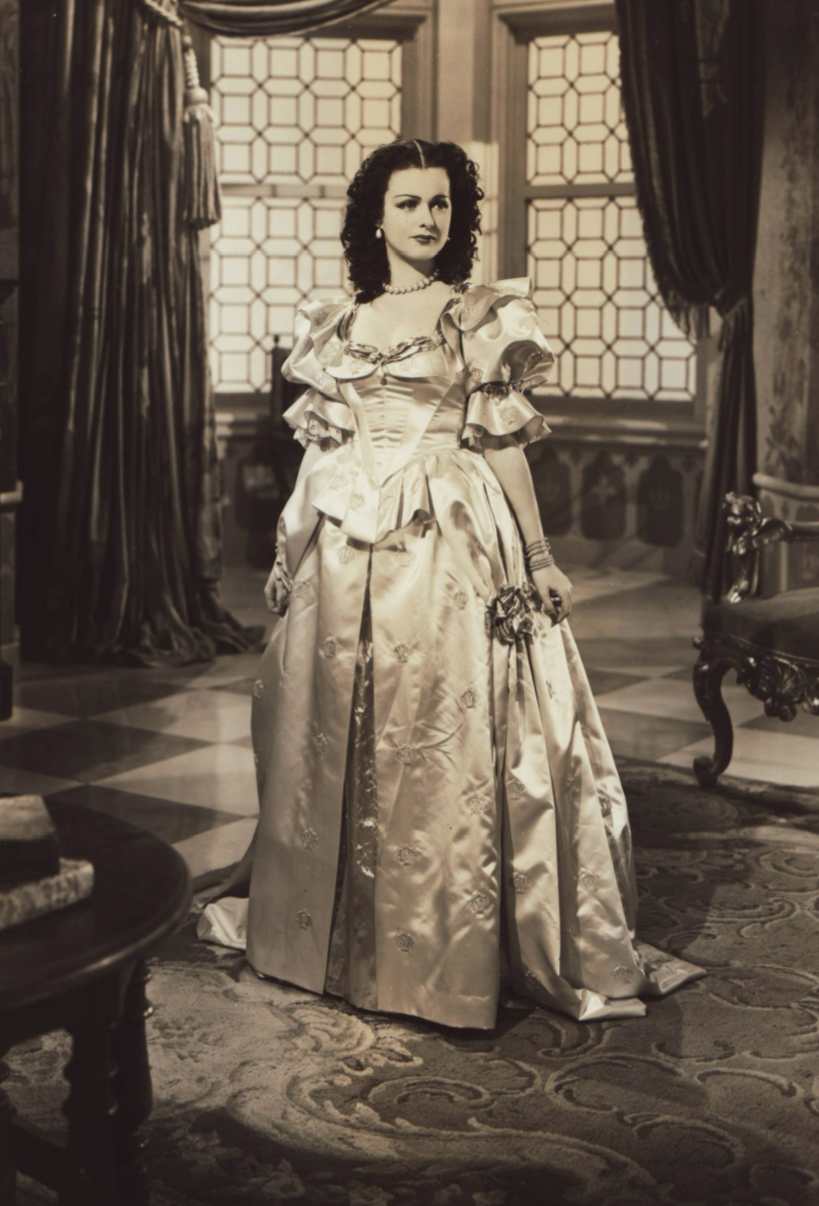 The costume was sold at auction late last year and you can see video footage of the gown as it was displayed at the auction house. You can see the intricate detail of the gold crowns and how wonderfully the satin has survived.


Louis Hayward co-starred with Bennett in the dual roles of Louis and his brother.
the film. Below is Joan Bennett in costume for her make up test for the film.

Please also look at the second gown I have worn by Joan Bennett in this film also.

A great piece of period film costume history from the year that is always remembered as being the best year in Hollywood history!

Posted by thecostumecollector at 5:13 AM 7 comments:

Email ThisBlogThis!Share to TwitterShare to FacebookShare to Pinterest
Labels: costume, Joan Bennett, period, The Man In the Iron Mask, vintage.

OSCAR, EVERYBODY LOVES YOUR OSCAR

As the Academy Awards were presented today, I am sharing something that is not a costume but very much related to film.

This is a commemorative Oscar Statuette that stands 5½" in height.

It dates back to 1935 and as the story goes was made as a table decoration during the dinner which took place to honor Columbia Pictures' 1935 15th Anniversary and the film, "It Happened One Night" sweeping the prizes that year. 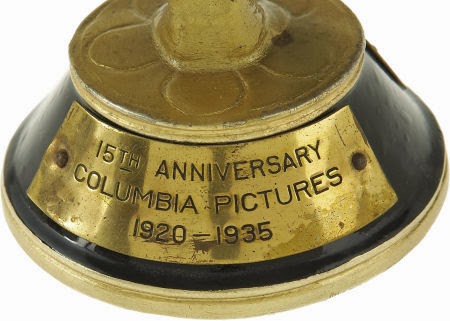 The other story is that Frank Capra had these commissioned for the films win. However you look at it, he remains a fabulous souvenir of Hollywood's Golden Age! 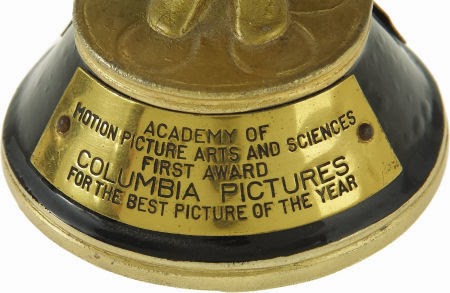 At the 1934 Academy Award the film won all five of the big categories. The film won Best Picture, Best Actress, Best Actor, Best Director and Best Screenplay. The Anniversary party therefore proved to be a big event. It was at the time the first picture ever to sweep all five awards.

Even these miniatures are highly sought after and collectible.

OK and a quick costume connection...when Clark Gable starred in this film, he took his shirt off to reveal shock and horror, no undershirt! Well fashion precedent was set and sales plummeted in mens undershirts for years. It wasn't until Paul Newman took his shirt off in 'Hud' to show he was wearing one, that sales finally returned. True Story.

Hope you enjoyed the Awards today!

Posted by thecostumecollector at 5:01 AM 3 comments:

CYD CHARISSE THE DANCING BEAUTY WITH THE AMAZING LEGS 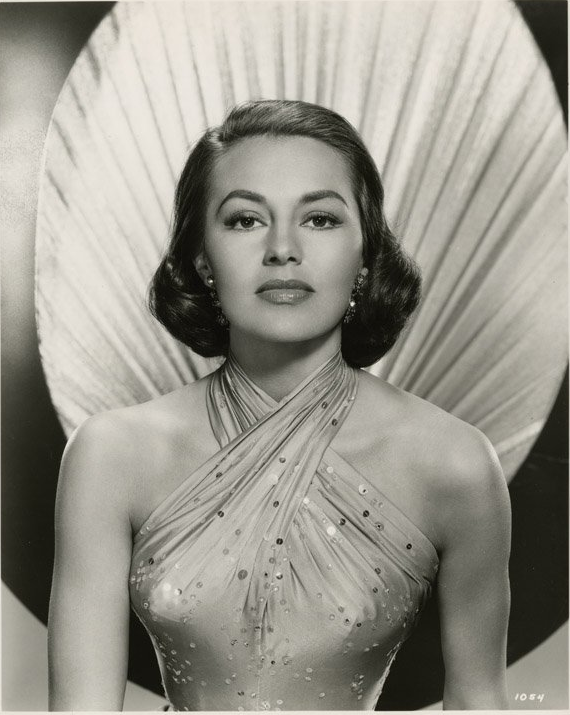 This beautiful ankle-length crepe evening dress was worn by Cyd Charisse in the 1948 MGM musical “Words and Music”. The costumes were designed by Helen Rose.

The gown has a studio label with Ms Charrise’s name and indicates “427 5162 Cyd Charisse.”

Here is Cyd and Perry Como posing at the piano. 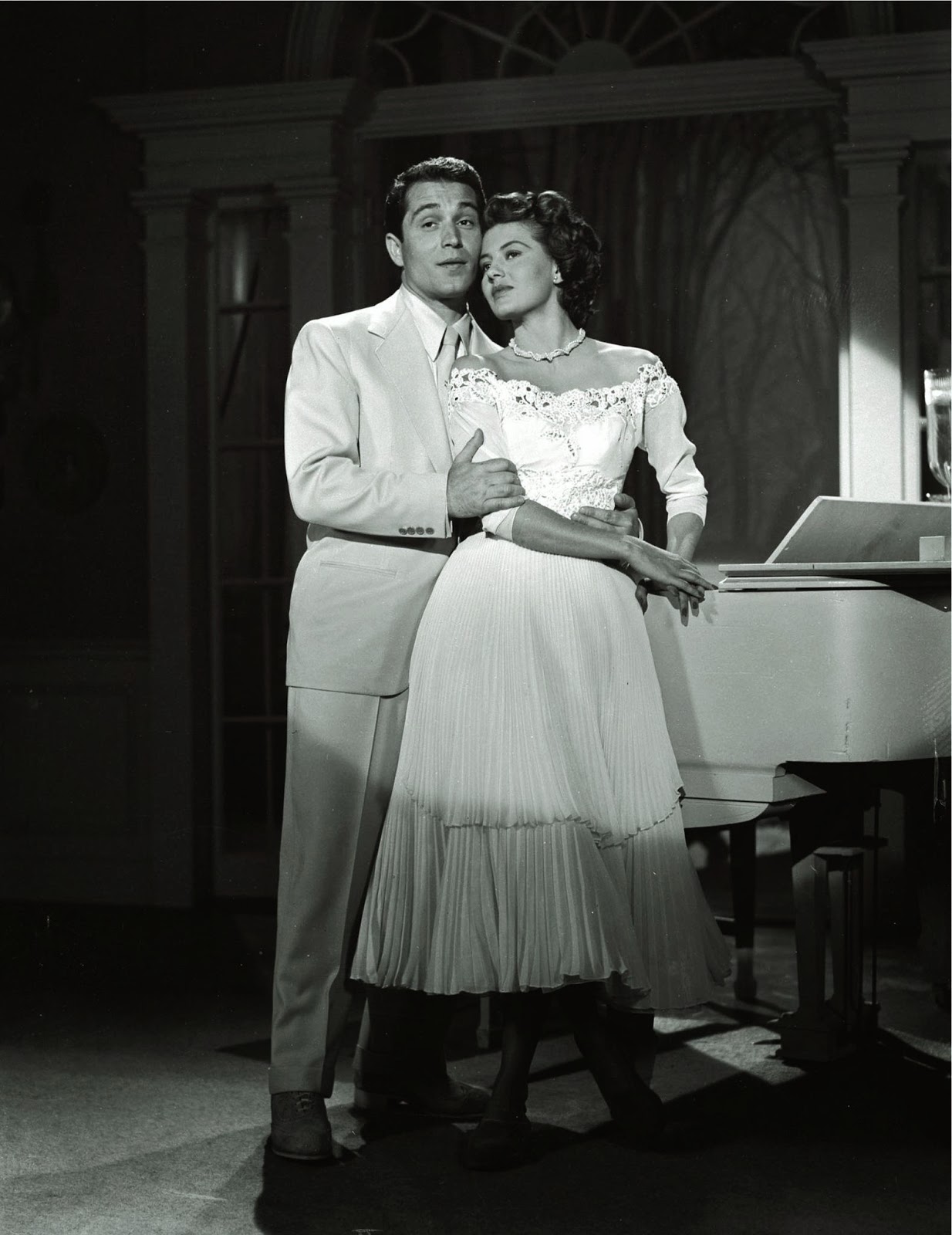 And here is another great shot of the two seated at the piano. 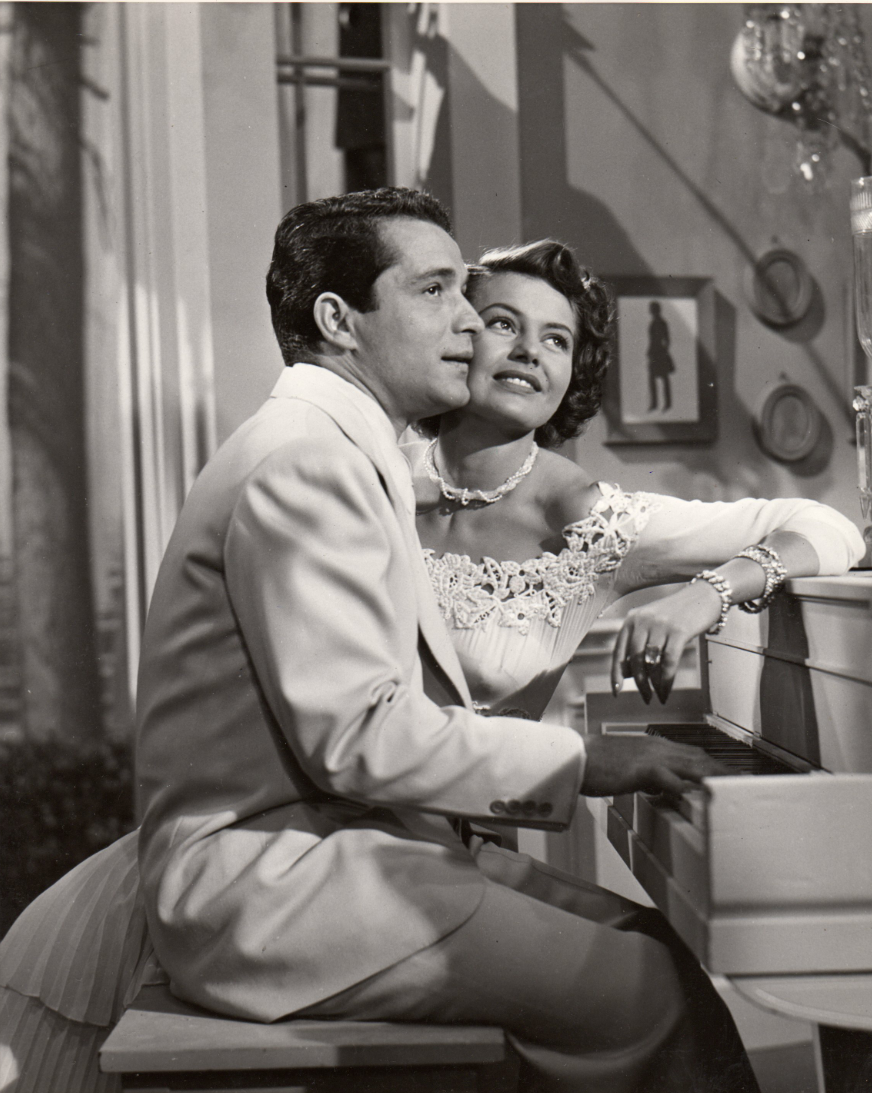 Here are some production stills of Cyd Dancing in the costume. 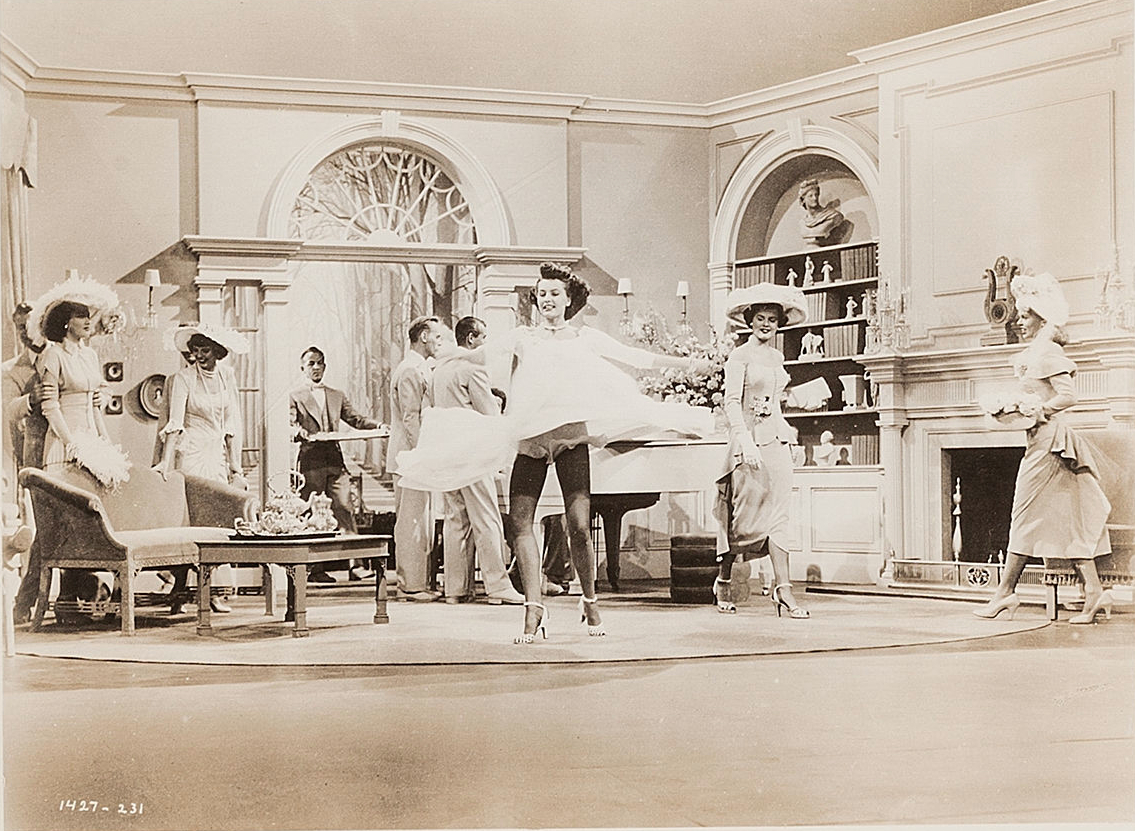 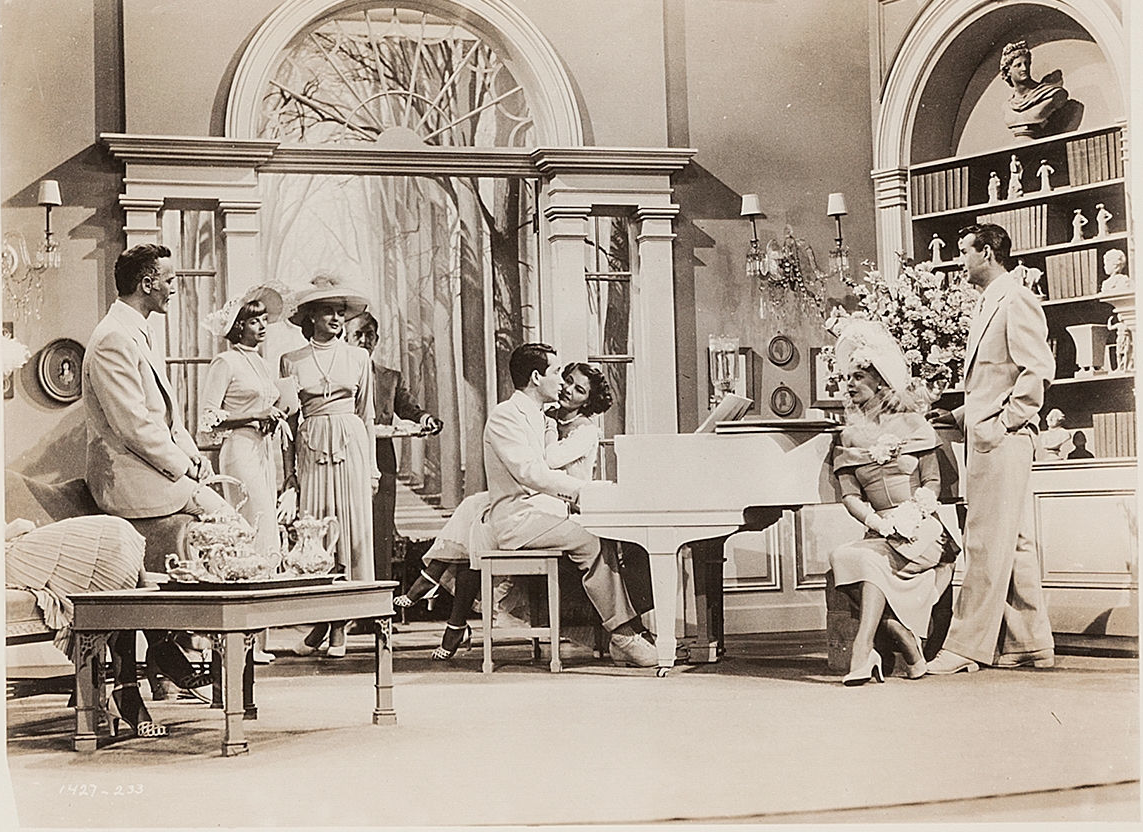 The film was a fictionalised story based on the musical composers Rodgers and Hart. The film had a number of MGM greats including Mickey Rooney, Tom Drake, Janet Leigh, Perry Como, and Ann Sothern. 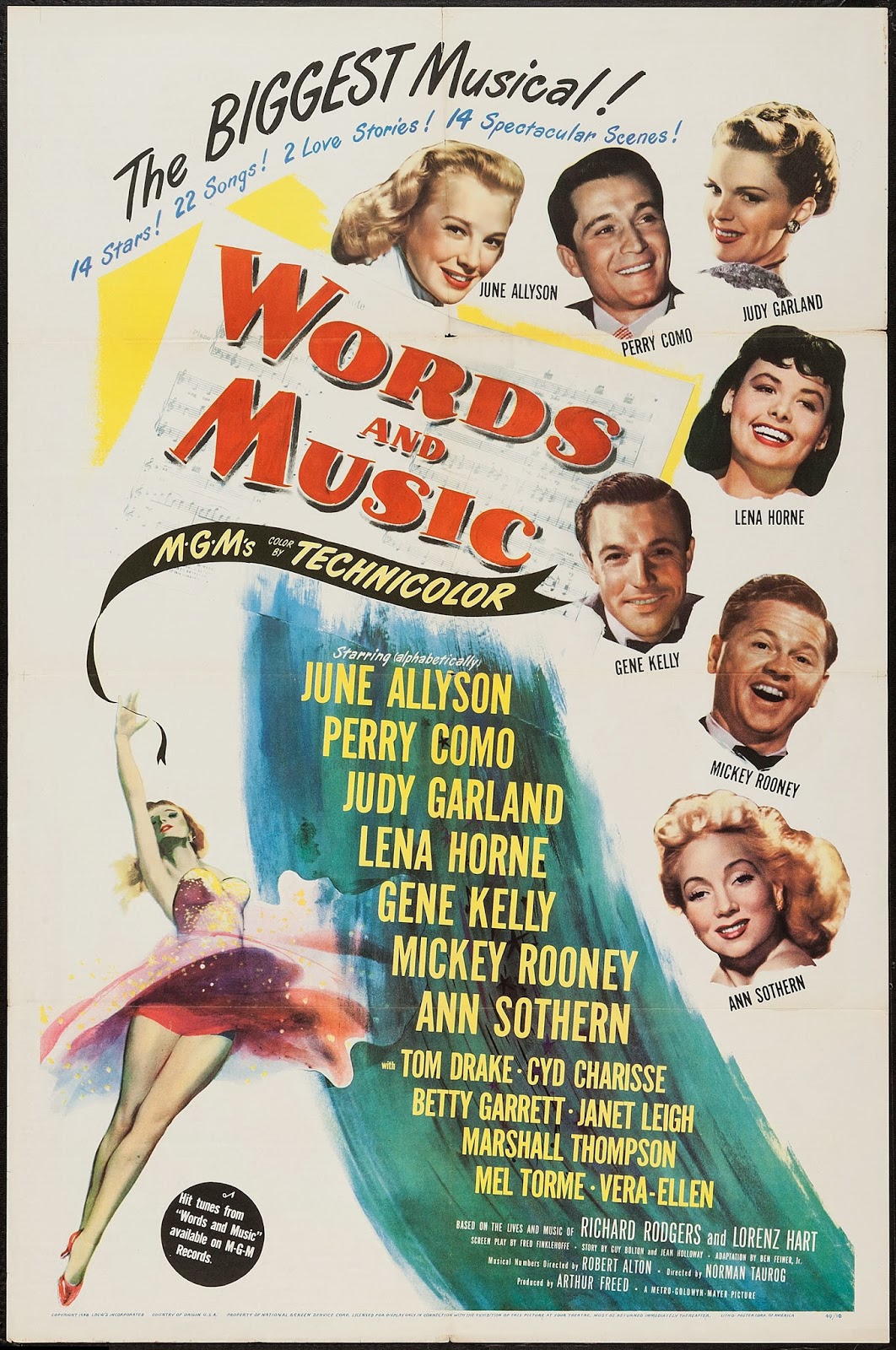 The gown is worn in the production number “We’ll Have A Blue Room”. Cyd dances beautifully as always.

Here is Cyd Chraisse, dancing in the gown with Perry Como in the song “We’ll Have A Blue Room”.

A wonderful costume piece from not only a beautiful star but from the golden era of the MGM musicals.

Posted by thecostumecollector at 7:27 PM No comments: