This is a gown worn by Ann Miller in the 1949 MGM musical “On The Town”. Costumes were designed by Helen Rose. Thew gown of shocking pink grosgrain embroidered on the front with black beads and sequins in a floral motif, with studio production label inside inscribed Ann Miller made for Ann Miller as Claire Huddesen in the 1949 film On The Town. 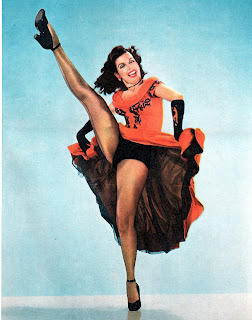 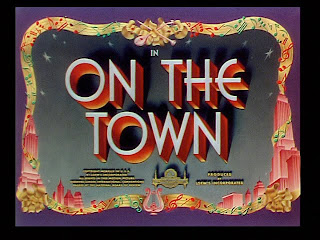 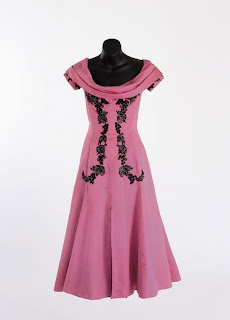 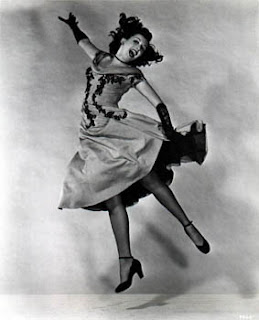 On the Town is considered to be one was 's brightest and best films of the post-WWII era. The film symbolizes the optimistic view of the future that was widely held in the in 1949.

The film tells the story of three sailors ( Frank Sinatra, Gene Kelly and Jules Munshin) on shore leave and have 24 hours to see .

The film, based on the staged Broadway musical hit of 1944 has music by Leonard Bernstein and Roger Edens and book and lyrics by Betty Comden and Adolph Green. The film has many well known hits and is remembered as one of the best films produced by ' and the Arthur Freed unit.

The film was directed by Gene Kelly and Stanley Donen. The film is also remembered for its combination of studio and location filming, when director, Kelly insisted that some scenes be shot in New York City itself, including at the American Museum of Natural History, the Brooklyn Bridge, and Rockefeller Center.

The movie was an instant success and won the Academy Award for Best Music, Scoring of a Musical Picture, and was nominated for a Golden Globe Award for Best Cinematography.

In 2006 the film ranked number 19 on the American Film Institute's list of best musicals.

Ann Miller starred in over forty motion pictures and Broadway shows and is best known for her tap dancing since her earliest childhood days.

When Ann Miller was signed on by , from the late forties to the mid fifties, she starred in some of 's most spectacular musical productions. These memorable musicals included "Easter Parade" which featured her dancing with Fred Astaire and "On The Town" with Gene Kelly.

And here is Ann Miller in On The Town. This a short doco and interview and shows the costume in the scene it appears in.

Posted by thecostumecollector at 11:58 PM No comments: